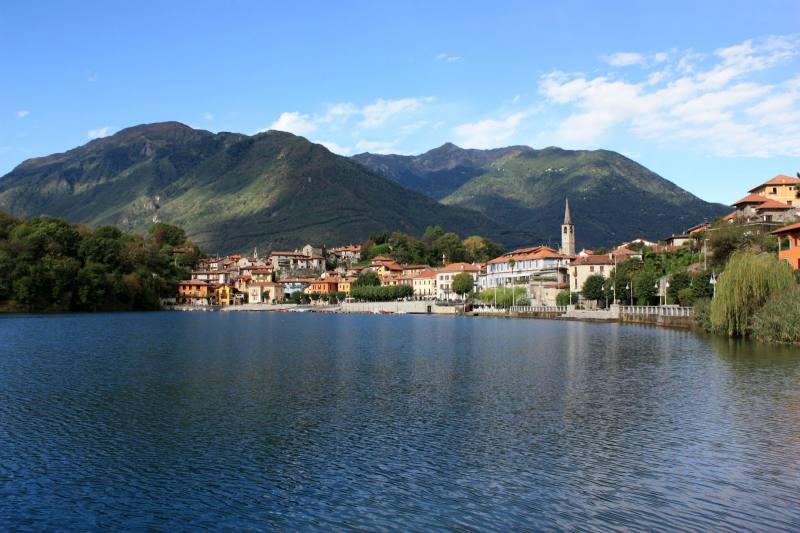 Mergozzo, awarded the Orange Flag by the Italian Touring Club, is a precious town located on the shores of a crystal-clear lake surrounded by the peaceful atmosphere of old houses lined next to one another and the pebbly narrow paths. For centuries, this has been a land of stone: in the local Granite Eco-Museum, you can discover the exhibition dedicated to the diggers and stonecutters of the granite quarries of Montorfano and the pink marble of Candoglia, also used to build the Duomo of Milan. In Groppole, you find the important megalithic complex known as Ca' d'La Norma, which dates back to the Copper and Bronze Age. Thirty minutes away by car, Aurano offers hiking enthusiasts a peculiar scenic itinerary along a stretch of the defensive stone system of WW1's Cadorna Line; in the same area, "Lake Maggiore Zipline" offers the exciting opportunity to fly: a 1850 metre-long steel cable, 350 metres from the ground, makes you feel like a falcon nosediving towards the ground. When you head back up Val d'Ossola, dominated by the "Himalayan" eastern wall of Mount Rosa, you find Vogogna, one of the 14 most beautiful Piedmontese hamlets in Italy, immersed in the green and rich in history, including the Viscount castle: we're at the entrance to the National Park of Val Grande, the largest wild natural area in Italy worth exploring if you are fit enough and are accompanied by expert guides. In Domodossola, you cannot miss out of the Sacro Monte Calvario, 12 chapels and a decorative apparatus of statues and frescoes founded in 1656, part of the the group of the sacred Alpine mountains, a UNESCO World Heritage since 2003. Do not miss out on a train journey along the Vigezzina-Centovalli Trainline which traverses Valle Vigezzo and the Centovalli for 52 km; spectacular views and landscapes await you.

Worth visiting in Santa Maria Maggiore is the Chimney Sweeper Museum, which tells the story of the Vigezzini - often children - who up until the last century abandoned their homes and families to work as sweepers in the Netherlands and Germany, and the parish church with the precious artwork. It is said that the "father of modern perfumery", Giovanni Marina Farina, left here in the 18th century and that he created eau de cologne in Germany. "My perfume is like an Italian morning in spring after the rain", he wrote "it is reminiscent of the oranges, lemons, grapefruit, bergamot, cedars, flowers and aromatic herbs of my land". But not only that: in the hamlet of Zornasco di Malesco near the Earthenware and Stonecutters Ecomuseum, the "dul Tacc" windmill reveals the secrets of an olive-press used in the past to create hemp fibre for linen and shirts. Another interesting fact: in the town washhouse, a small exhibition celebrates a famous local: Giovan Maria Salati, the first man to have swam across the English Channel in 1817 during an adventurous escape from a floating prison.

The Ossola Valleys are where traditional products are made such as the Val Grande Caprino,  Ossolano cheese, bresaola and mortadella (to be more specific, it is actually a cold cut made with raw pork meat to which a small percentage of raw liver is added); then there’s the Prosciutto della Val Vigezzo and the Violino di capra to pair with Coimo black bread, once produced with buckwheat flour and today made with rye wholewheat flour.