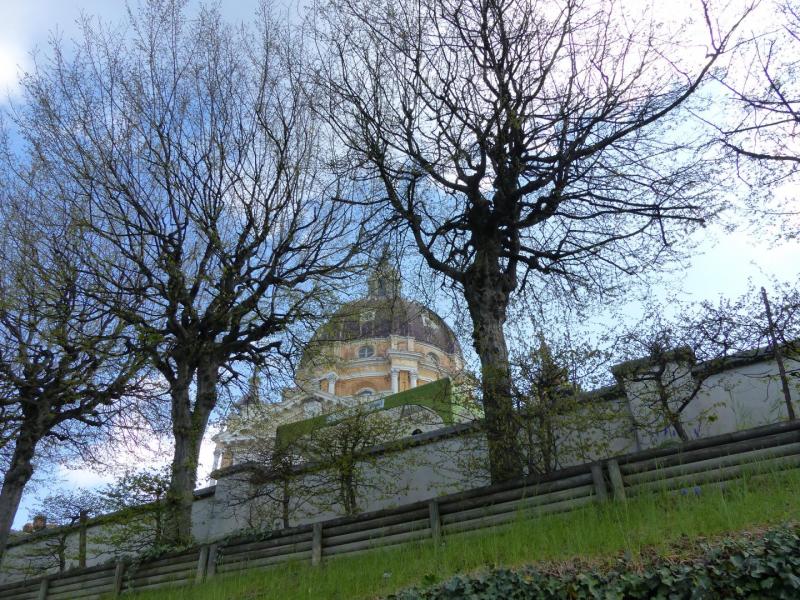 From piazzale Europa on the right bank of the River Po enter the historic centre of San Mauro and start to climb the Rio Ciumiss. Continue along Via Matteotti and, having left the last houses, reach the clearing of the "Tre Ri" where the paved road ends. Having passed the rio with a bridge the road becomes a dirt road and climbs steeply with several hairpin bends in a lovely forest of oak and ash trees and shortly after reaches Cascina Ciabot. Start climbing again and at a bend which takes to the right to Cascina Feissola (name given to the entire area and connected with the cultivation of strawberries) take a trail on the left uphill. This section is known as Sentiero delle Pietre due to the presence of monoliths of various size which erosion has brought to light and which were originally englobed within the tertiary marine segments that form the hill. At the end of a section which is decidedly uphill in the wood (spring flowering of primroses, dogtooth violets, anemones, etc.) the trail becomes flatter and, beyond the deep valley on the left, you can see the cliff of the Bric Rocca and the village of Tetti Bertoglio. Having reached a junction leave trail 61 on the left and continue on passing a bend and another flat section until you arrive at a new junction. Keep to the left climbing a rustic staircase until you reach the ridge. You cross an oak forest and reach Bric Giardin (550 m) with its characteristic 5-trunk downy oak. Follow the ridge, with a few ups and downs, and having passed the junction with the GTC, continue straight uphill turning slightly right and follow a fencing on the ridge. At a junction, you leave the trail on flat ground on the right and shortly you arrive at the square at the back of the Basilica of Superga a few steps from where the airplane carrying the "Grande Torino" football team crashed on 4 May 1949. Following the street on the left, you quickly reach the square of the Basilica itself with a breathtaking view of the Alps and the city of Turin.