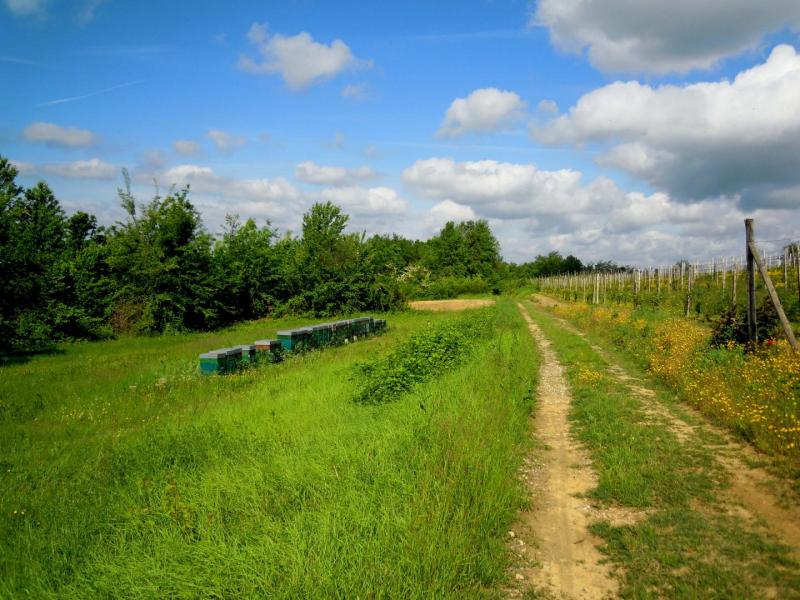 From the hamlet of San Carlo, we continue down the hill and through the town, until we reach the Baldichieri railway station, important interchange node, together with the railway station of Villafranca d'Asti. We continue, crossing the SR10, to reach the centre of Baldichieri. It was once a Roman military outpost and some news dates it back to the 1st century AD. Later news dates to 969 AD. Initially property of the Bishop of Asti, destroyed by the French troops in 1553, it passed to the Savoy family in 1575 and was granted in fief in 1619. The buildings of historical interest include the 18th century town hall, recently restored in some parts, the parish church of San Secondo and what remains of the castle, probably a fortification, today recovered and used as a temporary exhibition centre and flanked by a small restaurant that offers a magnificent view of the valley below. We leave the centre of Baldichieri, along viale Benedetto Croce and continue towards Cascina Mandoletta from which we resume the GreenWay, crossing large wooded areas. The route continues on the ridge until we descend to the valley to the hamlet of Salesina, from where we continue North, in the direction of Cortandone, always crossing purely wooded areas, alternating sections in the valley and on the ridge of the hills. We come to the end of the third stage, in the centre of Cortandone. Historically, the town has been at the centre of numerous battles between families to seize ownership of the territory. After numerous transfers of ownership and discussions which often resulted in aggression and acts of violence, in 1619, under the approval of the Savoy court there will be three co-lords, belonging to the Broglia, Facello and Pelletta family. Following the sale of the titles and territories of the Broglia to the Facello, in 1654, there will be only two families for over a century, before it passes directly under the Savoy government. Important testimonies are the Church of Sant'Antonio, the Church of San Salvatore and the many wayside shrines scattered throughout the territory.