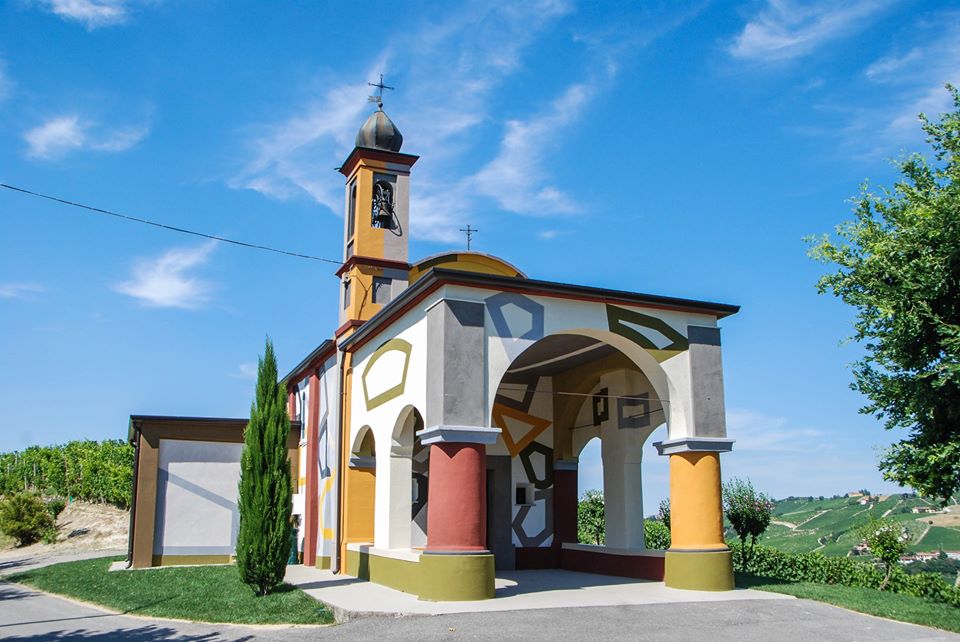 After our #Piemontestories 3, let's continue the discovery of the "Land Art" installations in open spaces throughout hills and vineyards, along an ideal itinerary from Novi Ligure to Casale Monferrato and Monforte d'Alba. That's "Art Mapping Piemonte", a special path leading to the most important works of contemporary public art in Piemonte. The project,promoted by theTourism and Culture Department of Regione Piemonte, with the support ofCompagnia di San Paolo, in collaboration with Fondazione Torino Musei and curatorship by Ilaria Bonacossa of Artissima, is conceived as an invitation to know contemporary art away from traditional exhibition so that to enhance its role as a tool for cultural tourism and economic development.

In Novi Ligure, at La Raia estate, a path winds through the vineyardsand unveils site-specific installations designed in the latest years, starting from 3 permanent works by Remo Salvadori, namely Nel Momento, a vertical installation made of sixteen tin elements placed on the manor’s Southern facade; Continuo infinitopresente, a continuous ring made up of steel cables created on the inauguration day, and Il sabatopiantare il cipresso… made up of marble, water and essences, on the path linking to Vignone, one of La Raia's historical wine cellars. OUSSER, a permanent work realized by Korean artist Koo Jeong at Borgo Merlassino inside the estate, can be admired only during those nights following days of shining light. Close to the Locanda La Raia you can admire Bales 2014/2017, six coloured plastic balls created by the German artist Michael Beu. Near La Raia's lake there is Palazzo delle Api, an overturned pyramid in Luserna stone by Adrien Missika, designed for nomadic bees and pollinating insects. The wine cellar hosts Cavaliere Nero e la vendetta del Gavi, by Francesco Lojodice, along with a sound installation belonging to the same project.

Moving towards Casale Monferrato, take a stop at Frassineto Po for 5633,9, a work by Paola Monasterolo made of one hundred white concrete blocks, gravels and pebbles of the Po river, colored earths and oxides, brick, beeswax. Each block tells a moment in the country inhabitants' life as an answer to the question: "When did you feel ALIVE?". A curiosity: on the surface of the blocks we read a number corresponding to the weight in kilograms of those who contributed by telling their personal story.Lastly, VivaioEternot by GeaCasolaro is a vegetale monument in the area where was located the Eternit factory,as an imposing asbestos victims’ memorial.

In Monforte the artist Letizia Cariello has created The Wind is Blowing in my Direction, made up of steel trees with the soul of organ pipes playing a chord in B flat with the wind, symbolizing the balance between artist's hand and nature's voice.

Il quarto paesaggio, by Hilario Isola, in La Morra, the famous village on a hillock dominating Barolo vineyards as far as the eye can see, is thought as a "camouflage" that turns a wall into an artistic installation, covered with 400 square meters of an innovative die-cut fabric reproducing a fragment of The Mirror of Life, the painting by Giuseppe Pellizza da Volpedo. The Brunate vineyard of La Morra, owned by the Ceretto family, is home to the beautiful Cappella del Barolo (BaroloChapel),that was brought to life by the creativity of the artists Lewitt and Tremlett. The Ceretto estates host a wide array of contemporary art and architecture works: from the Cube on the top of Bricco Rocche in Castiglione Falletto, to the panoramic Acino on the Monsordo Bernardina Estate in Alba, up to many others exhibitions and initiatives (described on the company website).

In Monticello d’Alba the work Frammenti by Valerio Berruti shows a transformed retaining wall, partly covered with a puzzle of reinforced concrete tiles as a metaphor for life. The centre of Alba houses Detour by Elena Mazzi, consisting of 12 orange doormats put right outside the  entrance of common and private spaces in Viale Masera, each with short sentences reporting life's positive and  critical aspects. Moreover, Neverwhere is the monumental work by Cosimo Veneziano dedicated to the utopia, where the lines on a marble disc echoes traces of Constant and Gallizio's nomadic city. The installation is placed outside the Beppe Fenoglio Study Center in Piazza Rossetti.

In Guarene d'Alba, Flat Earth Visa by Paul Knealeis the first work of an installations series thought for an open-air museum project by Sandretto Re Rebaudengo Foundation, which will be developed among the Nebbiolo vines. This news creation of the Canadian artist is conceived asa particular and intense dialogue between nature and culture.Share, inspired by the social sharing experience, is the title of Saverio Todaro's intervention on the water tower of Castellinaldo d’Alba, as a symbol in phosphorescent paint recalling the connection between people and that between water molecules.

David Tremlett returned to Langhe, namely in Santo Stefano Belbo (birthplace of the great Cesare Pavese, author of unforgettable pages about this land) with Wall drawing fresco in Pastelfor OPEN SPACE San Maurizio, a site-specific project realized for the decon secrated chapel of the boutique hotel Relais San Maurizio. The intervention is characterized by tones and geometries that follow each other rhythmically throughout the perimeter, evoking organ pipes or an urban skyline. But the Anglo-Swiss artist has given one of his most impressive effort in Coazzolo (Asti) by turning the little church Beata Maria Vergine del Carmine into the Chapel of the Moscato, which stands out with delicate colors among the rows of this precious wine. The Langa Astigiana and the Monferrato Alessandrino are a treasure trove in terms of "landing art" indeed.

The Art Park La Court in Castelnuovo Calcea is an artistic park set up in the Aluffi estate, which takes you on a kilometer long path through cypresses and farmhouses, meditation and tasting places, "pole-marking heads" and sculptures realized by seven contemporary artists, among which the fantastic machines built by the genius Genoese scenographer Emanuele Luzzati, emerging like a visionary presence along the walking itinerary based on the four elements - earth, fire, water and air - for a perfect mix of nature and man work.